When 17 years ago astronomers for the first time pointed a 1000 frames per second camera to the sky to look at meteors, known as shooting stars, they detected a surprising new phenomenon. The bright meteor of a few meters in size was engulfed in a glowing halo of hundreds of meters in size. There has been no convincing explanation for this halo, until now
A new study by a team of scientists has revealed that the meteor halo might share similarities to the aurora glow. This opens up an entirely new avenue in the exploration of meteors and their interaction with the Earth’s atmosphere. Their study is published in Monthly Notices of the Royal Astronomical Society and it describes a two-step process that leads to the appearance of this glow.

The story begins at about 120 km altitude, where a fast-flying space rock starts to experience intense evaporation due to its collision with the Earth’s atmosphere.  Individual collisions between the evaporated atoms and the atmospheric molecules are so intense that molecules break apart into atoms, and atoms start to lose their electrons. This hot mixture of molecules, atoms, electrons and ions (atoms that lost one or more electrons) is known as a meteor plasma and it is the main source of light that we recognize in the sky as a shooting star. In this new study authors added the Earth magnetic field into this mix and realized that under certain conditions the magnetic field will slow down the flight of electrons, leaving the meteor with an excess of positive ions. When the meteor reaches about 105 km altitude, this charge separation can lead to a strong local electric field around the positively charged meteor. 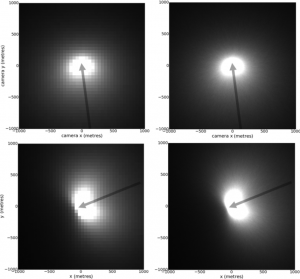 Simulated meteor halo structure at 105 km altitude. Simulation used one million particles ejected from the meteor. Brightness from the meteor itself is not shown, but grey arrows mark the meteor’s position and direction. Images in the upper row show the halo from the view point of the camera that detected the halo, while the lower row shows the halo from a side view direction perpendicular to the meteor flight trajectory. The left column images have the pixel size similar to the camera and the right column images have a high resolution that shows the halo’s fine structure.

At this point the second step kicks in. The meteor plasma also contains some protons, which are just hydrogen atoms that lost their electron. Unlike other positive ions, protons are light enough to be push out of the meteor by the local electric field. The protons quickly accelerate and then slam into the surrounding atmosphere. It actually takes lots of collisions with the atmospheric molecules and quite some distance to completely slow down such an ejected proton. Because of these collisions, the atmospheric molecules get excited and then release light, which we see as a glow around the meteor. Interestingly enough, the light from so called proton auroras is produced in the same way, except that there very fast protons come from the outer space.

“The entire mechanism breaks down at altitudes below about 100 km”, says Dejan Vinković, the leader of the team. “Ions and electrons want to stay close together, but their motion out of this equilibrium is driven by two processes – one is collisions they experience with other particles, and the other is the magnetic force that makes them move in a tiny circle. If the altitude is too low, the gas densities are high enough for collisions to dominate and break up the grip that the magnetic field has on electrons. If the altitude is too high, both ions and electrons are affected by the magnetic field and, again, there is no charge separation”, explains Vinković.

In addition to the numerical simulation of this entire process, the authors also show how the charge separation could be behind some other still unexplained phenomena that accompany the flight of shooting stars. This opens an avenue for more theoretical and numerical work, combined with the new generation of advanced observational techniques, on the still not fully understood phenomenon of shooting stars.

The other authors include Ante Šiljić, Frane Lunić and Jurica Teklić. Although they started this research while they were still at the University of Split, Croatia, now they work for other public and private organizations. Vinković is now also the director of Science and Society Synergy Institute in Croatia.